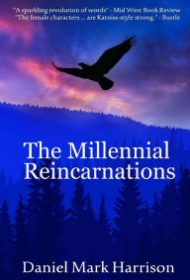 This conceptually ambitious novel revolves around a group of affluent young adults—largely in Shanghai and New York—whose lives and experiences are inexplicably interconnected.

In pre-9/11 New York City, an alcoholic driving his 14-year–old daughter and her best friend (the daughter of a Chinese tycoon) to a party in Westchester gets in an accident, killing both girls. In 2008 Shanghai, a salacious sex tape featuring 22-year-old society girl Sofia Jiang YuZheng makes her the target of blackmailers. A teenage girl named Milana (her location isn’t mentioned) has an orgasmic experience in a church bathroom. The seemingly disparate story threads ultimately connect at novel’s end with a bombshell revelation involving a generation of reincarnated souls created presumably by our ever-increasing dependency on technology.

This is a novel powered by big ideas—sociologically, economically, and spiritually. Chronicling the lives of this diverse cast of millennials, the author adeptly portrays the attitude and ideals of a global generation: from their intimate connection to social media and tech savviness to their preoccupation with public perception and popularity.

For some, however, the impact of those potentially profound concepts will be hampered by several issues. The book initially feels directionless and the storyline’s unconventional structure adds to the feeling of confusion. Varying first-person points of view, coupled with the concept that certain characters may actually be other characters as well (“And then Ryan kissed Sofia, or Milana or Stephanie – who was she?”) often makes for a challenging read.

Additionally, the text contains numerous copyediting errors. For instance, the author incorrectly labels his introductory material “Forward,” instead of “Foreword.” Other examples: “…back went the club’s patrons went back…”; “It took me many years to accept that [sic] speak to the girls again would be forever impossible…”

Despite such flaws, the ideas promoted in The Millennial Reincarnations are deeply thought-provoking. Those who persevere—and who enjoy intellectually challenging and conceptually weighty novels—should find this a worthy reading experience overall.