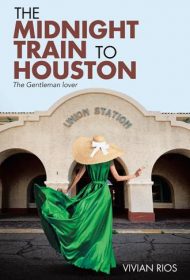 The Midnight Train to Houston is a historical romance/erotic novel set in the American South during the 1930’s.

Joe Hannigan is a successful businessman, travelling in style in his own Pullman coach, when his evening is interrupted by a porter asking him if he will share his carriage with a stranger. When Joe accepts, he meets Sara, a widow escaping an arranged marriage that her parents have planned against her will. The two quickly begin an intense relationship, but trouble awaits as Sara’s jilted bridegroom-to-be has sent an investigator to track her down.

Joe is the dominant force in their relationship, while Sara is delighted to be rescued and protected by him. He chooses her clothes, perfume, even her food and drink. Sex is an important ingredient in their story, and explicit scenes of intimacy cement his passion for her. It’s only when a major accident derails their happy existence that Sara shows any signs of establishing herself as an equal partner.

Historical detail is patchy and inaccurate (for example, Joe wears polyester suits), and although readers are told Joe “is great company because his conversations are varied and interesting,” there is little evidence of this.

The Midnight Train to Houston evokes a time of traditional roles, male chivalry, and wifely submission to produce an idealized romantic love affair. Unfortunately, it fails to convince. Overall, the book reads like a first draft—a story with some potential, marred by poor writing and underdeveloped plot and characters.