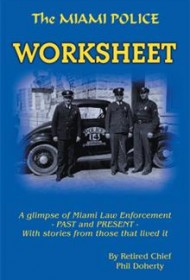 Doherty offers brief narratives about everything from clearing out vagrants living on city streets to homicide investigations to personnel changes. They are written, the author explains in a Preface, in the context of the dizzying growth of Miami, from a sparsely populated winter haven for the wealthy to a mid-sized city, and, after WWII, to a bilingual international metropolis heavily influenced by Cuban Americans.

Doherty notes that in police jargon, a “worksheet” is a chronological account of law enforcement activity, prepared every day by patrol officers and detectives. Information from the worksheets — ten million were filed in this time period — served as research material for the book, as did newspaper clippings and interviews. The book’s snippets reflect the minutiae of police life (In 1914, for example, the police chief posted “’Ten Commandments’ of parking” in the newspaper, in order to ease parking problems downtown), as well as great drama (numerous entries note when police officers were killed in the line of duty and recount bold crimes, including the brutal murder of a woman whose breast was cut off and stuck to a bedroom dresser mirror).

The entries are offered mostly chronologically and generally constitute a jumble of information with no overarching narrative thread. While many are clearly written, others are less so, and the book is in need of copyediting to make the tenses and point of view more consistent (some entries use the word “I,” often without noting who is speaking; others are written from an objective point of view).

Overall, the book graphically illustrates the dramatic range of police life and its obvious dangers. It is most likely to appeal to readers with a specific interest in Miami history or the city’s police force.