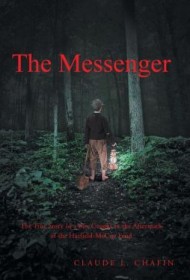 Combining family lore and American legend in a work of history that reads like a novel, author Claude L. Chafin has produced a crisply written new take on the infamous blood feud between the Hatfields and the McCoys.

The author’s grandfather, Andrew Chafin, was recruited at age nine to become a messenger boy for his notorious uncle, William Anderson “Devil Anse” Hatfield, the family patriarch. From this fact, Claude Chafin weaves a well-researched, freshly compelling story about the perils of vengeance and the distortions of justice along the West Virginia-Kentucky border.

Little matter that Andrew Chafin’s service to his uncle—he was “Devil Anse’s” go-between to his fugitive sons, Cap and Johnse –began in 1895, seven years after the feud had boiled up to its murderous peak. There’s still plenty of dramatic grist: Implicated by his message-carrying, the boy endures a hard growing up amid his violent kinfolks’ taste for danger, betrayal and murder.

Even better for the author: the hit 2012 TV series Hatfields & McCoys (starring Kevin Costner and Bill Paxton) and an ever-growing body of related literature attest to the timeless appeal of bad blood. At the time, even Mark Twain got caught up: A similar feud erupts in Huckleberry Finn.

Claude Chafin is certainly no Twain, but he gives us Andrew’s story in prose that ranges from serviceable to wry (“The one-room school that the neighborhood kids attended had several advantages, not the least of which was that it was there”) and recreated dialogue that occasionally sings of the rough-and-tumble Old South (“I am goin’ after that sonofabitch, and I’m gonna kill his ass.”)

Fully engaging, The Messenger reads like primo movie material. It could wind up as an ideal starring vehicle for a talented child actor.