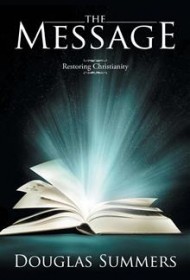 Douglas Summers, author of The Message, believes there are few true Christians in the world today. Instead, those who claim to be Christian are really just “Biblicists”—Bible experts who interpret the Bible literally, adhering to “principles they select out of the Holy Bible, rather than getting their religious guidance from one teacher, Jesus the Christ.”

In essence, Summers posits, Catholics, Mormons, Baptists, Quakers, Jehovah’s Witnesses, and other churches have gotten it wrong for centuries, collectively leading America toward its downfall. Many of these misconceptions, the author contends, can be traced to the Founding Fathers, many of whom were Masons whose influence in the forming of the Declaration of Independence and the Constitution allowed far too much freedom regarding the interpretation of religion.

In sharply pointed chapters, Summers looks to unpack the true teachings of Jesus from the Gospels while further arguing that the Bible has been made into an idol, a distraction that takes one away from the true God. In many ways, he makes strong arguments: The Ku Klux Klan and cult leaders like David Koresh and Jim Jones, he asserts, did not use Jesus’s teachings on love to commit their crimes, but books from the Bible that speak of revenge and destruction. True Christianity, he notes, is centered on love, mercy, compassion and forgiveness.

These are impassioned, thought-provoking arguments, but unfortunately Summers doesn’t back his idea with citations and sources, leaving readers uncertain about what is fact and opinion. Moreover, the author’s prose is often redundant (e.g. defining “Biblicist” on p.1 and again on p. 2), contains numerous misspellings, punctuation problems, and misused words (e.g. “costumes” versus “customs”). Long blocks of text before paragraph breaks add to the reading challenges.

In general, Summers’ insights are pertinent in a time when Pew studies show that many believers feel like Christianity has lost its focus. But the book is in need of serious editing for this author’s ideas to shine forth.