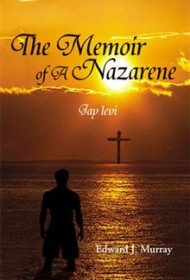 Author Edward J. Murray takes a stab at a fictionalized version of the gospel, this one according to Jesus, in his fourth novel, The Memoir of a Nazarene–Jay Levi. The presentation is a speculative look into the life of the “real man,” Jesus of Nazareth (a.k.a. Jay Levi). The storyline, told in the first person, generally follows that of the biblical gospel of Luke. Murray’s intent, however, is to set aside the notion that Jesus had a divine nature, and to explore his humanity.

While the concept is intriguing, the execution fails to deliver, due to its jarring mix of first-century historical and biblical background with contemporary, revisionist conjecture. Examples: Joseph using modern (rude) expletives in his speech; the Virgin Mary enjoying a sexual innuendo, and “Jay Levi” confessing to a 10-year drunken binge after graduating “bible school.” In Murray’s imagination, Jesus’ dad played poker on Thursday nights, and Jesus’ thought life included both the esoteric (“the artist … is the only one among us who knows how to break the rusty chains of the literal view”) and the crass (“I should let the clerics there watch me take a leak”).

Most Christians believe that Jesus was fully human, suffered temptations, grappled with emotions and the difficulties of being a Jew under Roman rule. But they don’t hold the notion that he was inane, as the author depicts him in his caricature of a Christ disconnected from his heavenly origin. Additionally, the book suffers from a lack of both copyediting and substantive editing. Topics switch mid-paragraph; spelling and usage errors occur on every page, weakening the prose significantly.

Christian publishers and booksellers have taken a stand against the fictionalization of Jesus Christ for good reason: his significance and uniqueness in history disallows such irreverent representation of the Divine. But even those who don’t hold as strictly to Christian values will find little to engage them in this work.