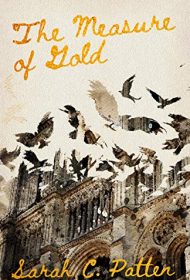 In her compelling novel, The Measure of Gold, Sarah Patten examines the link between the mysteries of alchemy and love through a passionate romance that develops at the height of WWII.

In June 1940, Penelope receives a letter from her dear friend Naomie, pleading with Penelope to join her in Paris. Naomie is living with a group of alchemists, and she explains that Penelope, daughter of a renowned scientist, could apprentice with a French scientist. Relenting, Penelope embarks on the strenuous journey from her home in Tennessee to Paris, which is now shrouded in fear and confusion following the German invasion.

The book’s first part covers Penelope’s time with the alchemist group, which is working to defeat the Nazis. In the second, she takes a more daring role, traveling to London to solicit funds for the alchemists, training to join the Resistance, and later working for the movement in a famous Parisian brothel, disguised as a maid.

The novel is filled with suspense. As a spy, Penelope encounters Nazi soldiers who have information on her Resistance group. When the woman running the brothel asks her to dance for the soldiers, she’s gripped with fear, yet has no choice but to comply.

Meanwhile, laws of mathematics and physics are used to explore Penelope’s attraction to Lucien, a fellow alchemist she meets in Paris. While drawn to each other, both are wary of their love, having encountered loss before and fearing the uncertainty of the time.

Patten delivers fascinating, unique characters and emotive scenes that capture the war’s devastation and Penelope’s ongoing struggles. In one passage, for example, Lucien and Penelope hide from German soldiers. When Lucien reveals himself to protect Penelope, the soldiers beat him ruthlessly as Penelope listens from her hiding place. The book’s ending, however, is abrupt and leaves some questions unanswered.

Overall, the novel is appealing for its fascinating details and likable heroine. It also serves as a powerful tribute to the brave women of the French Resistance.