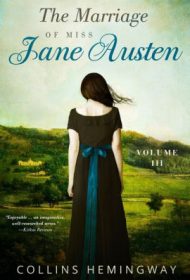 In this third and final volume of his Jane Austen series, Collins Hemingway again displays his notable ability to recreate time and place, moving on from the heady days of Jane Austen’s early love to a marriage beset by difficulties and a country at war.

Jane is a new mother almost totally absorbed in her beloved baby son George. Yet, even as she copes with a mother’s normal sleepless nights, she remains involved in her husband Ashton’s business and shipping ventures, made uncertain by the Napoleonic War.

Soon, more than war disrupts her tranquility when Ashton notices their son lacks alertness. After George is proven to be deaf, Ashton’s mother vehemently blames Jane for having faulty family genes and tries to turn Ashton against Jane. The rift between Jane and Ashton widens when, during a winter of illnesses, Ashton approves vaccination for their son against Jane’s wishes.

Hemingway adeptly portrays Jane’s despair when George dies from convulsions, leaving the married couple grieving separately and seriously estranged. When Ashton agrees to serve with the army as it moves to Portugal and Spain, Jane’s sister Cassandra persuades Jane to support him. Jane’s grand gesture is to follow the army with many other women.

Hemingway’s ability to convey emotion, such as depicting Jane’s grief over the loss of her son, is effective, and he vividly and authentically portrays the times: the many deaths and illnesses of children during times of elementary medicine; the “gull-soaring, sail-flapping days that cheered the men as they boarded their transports for Spain”; descriptions of the army slogging and sliding through Spanish mountains in winter.

The only downside to this is that the lengthy battle scenes may grow wearisome for Jane Austen fans. But otherwise, this is a lively, compelling read. A once-old-friend’s unconscionable treachery against Ashton is the final action in this sobering but moving finale to Hemingway’s successful trilogy.