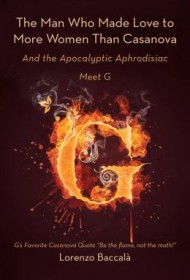 “G,” the anonymous and hyper-sexual subject of Lorenzo Baccala’s steamy and generally compelling interview book, estimates he’s had sexual encounters with “about three hundred ladies” over 30 years. Surprisingly, this is a paltry sum compared to famous studs such as Warren Beatty, who readers are told bedded down over 12,775 women and Fidel Castro with his 29,200 lovers. But numbers aren’t everything. Just ask G.

G willingly shares his sensual techniques: “I…stroke very, very slowly”; “Then I went to her breasts and bit on the nipples”; , “I …slapped her around and then untied her.” If there are doubts that such moves are successful, he’s happy to offer proof. For example, a mile-high encounter with a TWA stewardess culminates with “a huge, orgasmic shout” which G says he is certain “shook the rafters in the pilots’ cabin.”

These macho exploits might be over the top, but Baccala knows how to coax his subject’s more endearing side; G confesses: “Women in a sense have taught me more about life than men,” and “My brain, for whatever reason – maybe it was a genetic mutation – has an enormous number of women-appreciative cells.”

Baccala covers subjects ranging from G’s take on “Faking Orgasms,” “Muff Diving” and encounters in “Trains, Planes, and a Convertible Mercedes” to tales of being “Held Hostage by a Nymphomaniac.” Though readers may sigh on occasion over G’s super-sized id and his obvious womanizing, they’re just as likely to want to pull up a velvet seat and hear more.