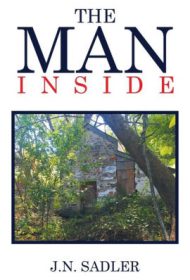 J.N. Sadler’s novel The Man Inside explores a young woman’s efforts to free herself from her past, depicting a complex, confused character who finds kismet with equally troubling souls.

Amanda Effrem (“Effie”) is a young writer who has received a large inheritance with her mother’s passing and left her job. Aiming to rethink her life, she moves to Maryland’s eastern shore, where she’s soon drawn to the “overlooked Chippendale,” Mortimer Washington, a handsome yet strange idiot savant who plays soulful tunes on a harmonica. Meanwhile, another local man who has traded his Thailand missionary work for a more secular life, has his eye on Effie.

The story examines Effie’s former life under a controlling parent who reined in her daughter’s social/sexual development, along with Effie’s dealings with a disreputable therapist. Ultimately, a harrowing confrontation with the mysterious Mortimer spurs a series of events that fuel Effie’s ever-present inner emotional conflicts.

While an interesting set up, the story suffers from several flaws. First, Effie’s reactions to situations often seem too fantastical and far-reaching for believability, particularly those involving romance. From attractions and longings to primitive animalistic assaults, the sex/romance scenes— framed by clichéd phrases like “Tremors went through her body like an electric surge …” —read like those from an over-the-top romance novel.

Well-intentioned, nosey, sibling landladies add lightness to the storyline, but they are also somewhat predictable. And while tension builds in the last chapters, the wrap-up seems too quick and neat.

Additionally, there’s much repetition regarding Mortimer’s Adonis-like looks, his assumed parents’ criminal background, and his disturbing childhood history, and the text requires further proofing for errors of missing or added words.

At story’s end, a new character is introduced, suggesting that Effie’s entanglements might not be over. While the story’s flaws will likely prevent some readers from following the characters into a new tale, those who like psychologically mired characters with underlying reveals may appreciate this novel and any others to come.