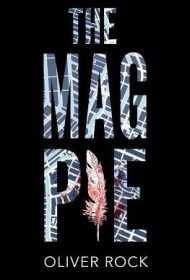 British-born author Oliver Rock draws on his experience living in Amsterdam for this atmospheric, twisty thriller. Rock’s disquieting novel portrays a weathered homicide detective and his elusive prey: a serial killer nicknamed “The Magpie,” who is leaving naked, murdered young men with broken necks as trophies in the city’s streets.

In a creepy opening, we bear witness as two furtive figures meticulously prepare the killer’s latest victim for its gruesome exhibition: The body is stripped of all valuables and clothes, scrubbed with alcohol to remove evidence, then dumped on the street to be found. From here, we meet a handful of ordinary Amsterdammers who have no idea they’re about to be drawn into this macabre scene. They include a trio of drama-prone roommates: hot-tempered nurse Roos, her flight attendant girlfriend Jade, and part-time prostitute Fleur. Also in the mix are the girls’ housekeeper Jan, and Jan’s beautiful but insouciant and spoiled girlfriend Mariana. As events unfold, all these characters reveal their true personas, hidden motives, and dark secrets as a meticulous but flawed police task force closes in.

By far the most interesting player in this cat-and-mouse game is Detective Arnaud Van Loo, assigned to lead a small task force to stop the killer. Van Loo fits a classic noir trope; a divorced, traumatized alcoholic whose only solace lies in his maddening investigation and downtime in the pub with a kindly barmaid who bears her own secret involving the case.

Readers expecting a pulpy, propulsive thriller a la Patricia Cornwell should know that The Magpie is much more sedate. Instead, Rock offers a methodical police procedural in the style of Ian Rankin’s indefatigable Detective Rebus. Still, he effectively draws Amsterdam as an ornate but treacherous pageant with a cast of characters bearing secrets and dark inner lives.

A bleak, somewhat ambiguous ending suits not only its narrative style but also Van Loo, a lonely, desperate character who is ultimately left with more questions than answers.