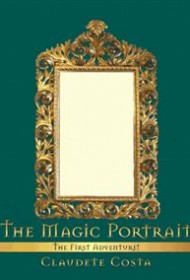 The Magic Portrait: The First Adventure! is the beginning of a proposed mystery adventure chapter book series. It stars a group of creative, fearless tween friends who love a challenge, a mystery, an adventure, and each other. Author Claudete Costa invites readers to take an active part in the action by assigning them a code name along with the other characters. The reader is “@,” and the other kid adventurers are known as “%,” “#,” “$,” “{*},” “ïŠ” and “&.”

The story takes place in an ancient city in Minas Gerais, a state in Brazil. Seven friends (including the reader) find themselves staying in a 100-year-old farmhouse. Bored and eager for something to do, they begin exploring their home and its surroundings with the help of Tiao, the 75-year-old caretaker.

When they discover an ancient book in a huge wooden chest in the basement, they secretly take it up to their room to read it together. It tells the story of Colonel Arden, an old mine, a lost fortune in gems, and an unsolved mystery of disappearing slaves. With Tiao’s help, the friends find a map and set off to discover what really happened. Through a fast-paced series of plot twists and turns, good is ultimately rewarded and evil is put in its place.

The Magic Portrait tells an atmospheric, complex story but is at times hard to follow due to pedestrian writing. For instance, characteristics attributed to the friends in the book’s introduction are not clearly demonstrated in the text. As a result, it’s sometimes difficult to tell them apart. To commit to the series, young readers will want to know much more about the seven friends and their unique personalities and points of view. Additionally, the code names become distracting as one tries to remember who “%” is.

The Magic Portrait is action-packed, but until the writing style is polished and enhanced, the story will likely deter young readers.