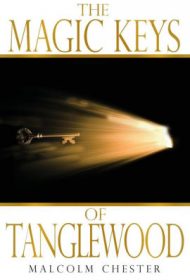 In Malcolm Chester’s novel, four 14-year-old girls who attend a private school struggle to free young students abducted by another student who has turned into an evil witch.

Skylar, Carly, Peggy, and Jade will soon attend Tanglewood, a centuries-old prestigious girls’ school. At a sleepover, Skylar tells them about its terrible legend, explaining that centuries ago, a student named Samantha bullied a fellow student named Elizabeth. Elizabeth then warned students that every Halloween one of them would vanish, and, with each student’s disappearance, a lock would appear on the school gate. The girl would then be trapped in a place “between this world and heaven” until the key to the lock was found. Later that night, a ghost appears and reveals that the “magic” keys lie hidden somewhere in tunnels beneath the school.

The four friends set out to free the trapped students, but Skylar and Carly get pulled into the netherworld and must finish the quest for the keys, facing endless hazards: ferocious bears and wolves, biting vampire bats, projectile spears, and more. Luckily, they get some inside help from the imprisoned students, many of whom are now centuries old.

While an interesting premise, the book has major flaws. The limited, middle-grade vocabulary prevents rich descriptions and well-honed, rounded characters. The plot to rescue the captive students stops and starts, interrupted by the girls’ endless pursuit of boys, which is both tiring and offensive; the girls and their respective boyfriends judge each other in superficial ways, continually making tasteless comments.

In addition, there’s a plethora of unhealthy body-image messages. “Girls obsess too much about their weight,” says Jade — after the four counsel a girl despondent about her weight: “If you lose thirty pounds, you’ll have earned your way into our group…”

The simplistic vocabulary marks this as a middle-grade story, but the content is more appropriate for young adults. Unfortunately, the story requires revision to attract either audience.