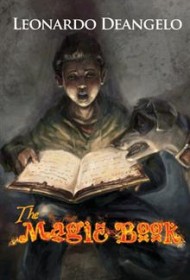 Flying serpents are just part of the action as Sam and his dog Spot get pulled into another supernatural battle in this companion to author Leonardo Deangelo’s The Crystal Cave and The Lost Valley.

A man at a garage sale gives Sam a box of curiosities that include a book with cryptic writing. Sam flips to the last page and sees an outline of a hand and the details of a magic spell. The book is about its author, a wizard named Zantor, who went into hiding to get away from the pressures of protecting the kingdom of Notts. When Sam presses his hand to the outline and reads the spell, he and Spot are magically beamed to Notts.

As they arrive, an evil king, knight and witch are about to invade Notts, and the king of Notts has dispatched his knights to stop them. But first Zantor must be convinced to come out of seclusion and help. The wizard reluctantly agrees and a battle erupts, continuing until the book is nearly over.

The battle tactics are colorful and there’s plenty of action. (At one point, Spot is stabbed and Sam saves him by squeezing a magic flower over his wound.) Yet the writing is stiff and wordy, and Deangelo buries the suspense, rephrasing the same thoughts over and over before getting to the action.

Additionally, the battle takes over the plot. Rather than develop the role of the magic book, Deangelo uses it only to transport Sam and Spot. He also overlooks the other items in the box, which aren’t mentioned beyond the first chapter. The writing is simple enough for newly independent readers to follow, but given the story’s issues, it may not hold their attention.