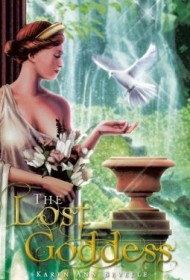 The Lost Goddess walks a fine line between young adult and adult fantasy. Mermaids and Immortals in an ancient forest face threats that originate in a corporate boardroom, a twist that pays off nicely here.

When Vina, an Immortal, is separated from her family in the woods, she befriends a mermaid while waiting for her Guardian (a wolf) to lead her back to them. The Immortals, a group of gods with superpowers, need to hurry, though—Rachelle la Fae is determined to capture Vina and literally drain her essence, in hopes of getting a total immortality makeover. On her side are the genetically engineered Gobelines, truly horrifying creatures whose strength is only exceeded by their stench. Will good prevail over evil?

Author Karen Ann Revelle has created what appears to be the first book in a series, and her artful plotting and creative flourishes make readers care how things turn out. Despite the fantastical plot elements, the emotions at the heart of the story ring true, and the travel and fight scenes are bold and exciting.

The book contains enough misused words and grammatical errors, however, to require a thorough line edit; as written, it’s not ready for an audience of impressionable younger readers. But the story is strong enough that the mistakes don’t impede the fun.

Rachelle la Fae is a particularly nasty villain, and she’s only been subdued, not eliminated, by the end of this volume. If the series continues, readers will be eager to see the mischief she gets into, and to learn more about the Immortals, including their decision to travel on land and fight like humans despite their powers.

This could be a winning series. Here’s hoping Bevelle cleans up the text and allows the story to shine through.