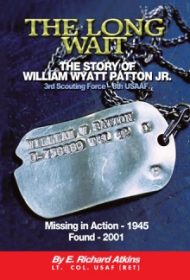 Patton died on Jan. 15, 1945, when his P-51 fighter crashed into a marsh in France. His body wasn’t recovered for 56 years, until a farmer unearthed the wreckage while trying to drain the swampy land. Tragically, his parents and siblings all died without knowing what happened to the well-liked 27-year-old pilot.

When Patton’s plane was discovered in 2001, military authorities seeking information contacted Atkins, an expert in the Scouting Force, to which Patton belonged. Intrigued by the story, the author decided to write this biography. Atkins devoted five years of research to the book, gathering stories from Patton’s family, tracking down military records, men who served with Patton, and key figures in France.

Atkins reports on Patton’s life, family and military career (he enlisted in the Army Air Corps at 16) and reconstructs the crash, answering some of the lingering questions. He also looks at honors accorded Patton, both in the U.S. and France, after his remains were recovered.

Unfortunately, his book suffers many writing errors. Sentence fragments, errant capitalization, wrong words and quirks such as using an ampersand instead of the word “and” detract from the story. There is also extraneous material, such as the final chapter being devoted to the history and accomplishments of the Scouting Force.

In addition, Atkins sometimes gets too technical, as in this mission summary: “2 aircraft call sign Kodak White flew bomber route to 060 degrees east reporting low fog over bases; 10/10’s over channel (at) 7-8000 feet, high cloud near Charleroi (at) 20-23,000 with fair visibility. CAVU to Metz, fog in all valleys.”

While such issues are likely to deter general readers, Atkins has delivered a welcome tribute to a long-forgotten hero, one that should hold appeal for WWII buffs.