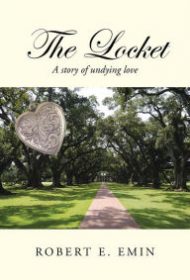 Stories of the Civil War have yet to lose their fascination for readers, with good reason: A war fought over slavery and its abolition is fraught with moral issues that are still relevant today. Author Robert E. Emin puts a forbidden romance at the heart of The Locket.

The story opens in 1817, when a child is born to a slave who dies while giving birth. By age three, it’s clear that Leah was fathered by the plantation owner, so he sells her at auction. Purchased by John McKibben, in part because of her striking blue eyes and Caucasian features, Leah grows up alongside McKibben’s son Jared, and over time the two fall in love and Leah becomes pregnant. Their plans to run away together are thwarted, however, and Leah’s son grows up without a father. The first part of the story follows Leah until her death, after which Jared’s search for the father he never knew begins.

The narrative contains a few misspellings (including “field salves”) that slow things down, but the story’s central difficulty is that it’s just 43 pages long. Rather than develop characters or include rich descriptions of the time and place, the story feels rushed and, thus, devoid of much feeling. A tri-generational story such as this requires much more space to flesh out all of its elements.

Much of the appeal of Civil War stories is the historical context. The Locket has a strong story of love and familial longing at its core, but it would be so much more enjoyable if the characters were allowed room to come alive and if it were more deeply immersed in its time and place in history.