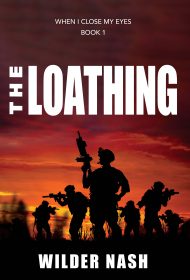 Maddox Edward Hunter is an Australian employed by Breed Tactical as a security contractor working in Pakistan for the American government. He must recapture an Aussie prisoner named Poltroon, who escaped from custody and wound up in a Taliban warlord’s hands.

At six-feet-five, Hunter is an intimidating presence who is often called “the big man,” has “balls bigger than a rhino’s,” and thinks calling a colleague a “lunatic adrenaline junkie” is “high praise.” But to his mild annoyance, he occasionally must remind people that “I’m not an American.”

Meanwhile, his fiancée Stella works for Doctors Without Borders in Monrovia, Liberia. Some seriously bad dudes decide to target her to get at him, and she’s in mortal danger.

Nash doesn’t skimp on violence, whether it’s a gory battle scene, a mother blown up in a Liberian minefield or another woman’s graphic murder by “Sticky Fire”: “homemade napalm with a twist,” explains her abductor. “…It can’t be wiped off. In fact, wiping it only makes matters worse. Spreading it over a greater area, to burn, and burn, and burn. Fantastic, don’t you think?”

The pacing is breakneck and the details vivid, such as the “clouds of white smoke from over-oiled barrels” and “The ghosts of forgotten knife fights cross-hatching his lower jaw and lip.” One man is called the Death-Bringer, a nickname that could apply to many characters.

Nash could easily cut the f-bombs by half, and he could also lose the abstract chapter titles and let the story speak for itself. Chapter 35, for example, is titled “Repercussions of a Perfidy” and subtitled “Part 2 Adjure.”

For readers craving action, however, this thriller fills the bill. It may leave one feeling morose; the story’s best line is: “it’s the emptiness that weighs the most.” But the ending screams for a sequel readers would appreciate, as the big man has grim, unfinished business to address.