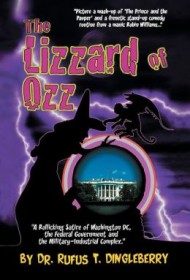 Picture a mash-up of The Prince and the Pauper and a frenetic, stand-up comedy routine from a manic Robin Williams, and you’ll get a fair idea of the style of The Lizzard of Ozz.

The slim story, which serves as a vehicle for humorous riffs more than plot, involves underachieving Eric Blair and his lookalike Billy Gooch, both of whom live in the District of Columbia, or, as the narrator calls it: “Baghdad on the Potomac, OZZ on the Tiber.”

Billy is the son of the president, aka the Lizzard of OZZ. Tired of Secret Service restraints, Billy fortuitously stumbles into a bar where he meets Eric, and the two decide to change places. This allows Eric to meet the crazed president and the leaders of his cabinet, including Marcia Stewart of Health & Human Services, who is not what she appears to be, and Secretary of Defense Dr. Edward Zeller, inventor of the helium bomb that caused all dogs to speak Swedish.

All the while, Eric is hounded by munchkin Secret Service operatives outfitted with super-squirters and Haagen-Dasz [sic] shoulder insignias. Breaking up his tour of the cabinet are riffs about the seven different kinds of women and the five varieties of techies and an occasional moment here and there of lucidity, such as when the author describes brewing processes. It’s a wild ride, jolted frequently by misspellings (e.g. Vivienne Leigh and Leigh Remick), and a penchant to disregard the difference between plurals and possessives.

In defying the conventions of a mainstream novel — coherence, consistency (not to mention proofreading) — the author, Dr. Rufus T. Dingleberry, has instead given us a story in which the story itself takes a backseat to a kind of off-the-wall ridiculousness that will amuse some readers and exasperate others.