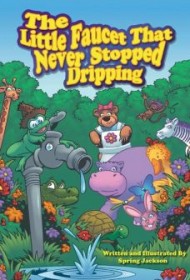 The Little Faucet That Never Stopped Dripping is a picture book featuring a progressive story about a slow-dripping, yet disused, outdoor water faucet.

One day, a frog discovers the faucet and asks if he can share some of its water. The faucet obliges, creating a puddle for splashing. When the frog asks permission to bring a friend the following day, the faucet is happy to accommodate the frog’s wishes.

A chain reaction occurs as each new friend invites another. As each additional creature arrives, the faucet cranks up his water flow in order to make a bigger puddle — but soon, Mr. Frog realizes that the water is now gushing into a nearby pond and saves the day, turning the faucet’s handle and slowing the water flow back to a drip that will keep the puddle intact for future use.

Jackson has created an original story about the symbiotic relationship between animals and the faucet. She also employs repetitive onomatopoeia to bring her narrative alive. Each time an animal is mentioned, she follows with a sound they make, such as: “The little faucet ‘Drip Drop’ saw Mr Frog ‘Rrribet’, Mr. Duck ‘Quack, Quack’, Mr. Turtle ‘Wobble Wobble’…” and so on.

Despite such fun, there are a number of punctuation and spelling errors that create confusion and make the story difficult to read aloud. In addition, the author is inconsistent in her execution: For example, the faucet seems to be able to turn its own handle, yet isn’t pictured with arms or hands. Sometimes the onomatopoeias are used as if part of the animal’s name (“Mr. Frog ‘Rrribit’) and sometimes as description (the faucet thanks Mr. Frog “for helping him to slow down his water back to a ‘Drip Drop’). Her pencil drawings are childlike, rather than professional looking.

Nonetheless, Jackson’s picture book is fun and engaging. Once the mechanical issues are cleaned up, it has real potential to become a read-aloud favorite for children.