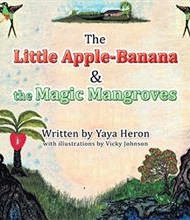 Yaya Heron’s Jamaican children’s story details Little Apple-Banana’s attempt to persuade the mangroves to help his mother have more children so that she can return to a proper grove of banana trees.

Heron’s book provides a disjointed and often puzzling read. The plot lacks key details—such as the definition of an “apple-banana”—while simultaneously providing unnecessary detail that is ultimately confusing, such as “the pleas of a little black baby girl” that somehow “saved the banana tree” (though from what is uncertain). To add to the perplexity, the prose is often ungrammatical, as in: “The smell of slightly stagnant water, a general oozing underfoot and the little Apple-Banana found himself by the mangrove swamp.”

Little Apple-Banana’s narrative concludes with a strange and confusing sequence of events involving lightning (spelled as “lightening”), mysterious “ice-blue letters on a lightening [sic] rod,” and “mangrove folk” who are “whirled round and round like bobbins.” It will leave readers scratching their heads.

Overall, this picture book presents many reading challenges. Although the idea of a Jamaican children’s story is appealing — and the author clearly has passion and verve for the story — its execution falls short.