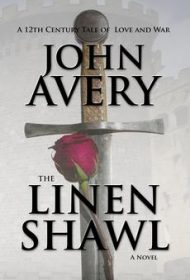 During this civil war, King Stephen of Blois and Empress Matilda turned their county into chaos as they each fought to become the acknowledged successor on the throne of the deceased Henry I. The narrative is set from 1141 to 1142. Caught up in the bloodbath are master carpenter Noah Caperon; Nest, an 11-year-old orphan girl who had come under his care; Barriemore Godwinson, Noah’s childhood friend and aspiring knight, and other well-drawn medieval figures, great and small.

Noah, Nest and others are inexorably and dramatically dragged into the war, testing their courage, God-given talents and loyalties. Woven into their quest for peace and normalcy are kidnappings, rape, torture, lust, cruelty, beheadings and…love, compassion and self-sacrifice.

Avery rises to the challenge of vividly describing the brutality and fearful dark alarms that spread throughout the countryside as the story unfolds. The author adeptly—and graphically— details swords slashing, daggers plunging and axes falling.

But the story falls short in its numerous fluke encounters and chance meetings. All of them, to some degree, are pivotal to the storyline and test the credibility of the plot in general. For example, Barriemore’s friend Noah is the very first person he sees among the hundreds of dying and dead scattered about a battlefield on which the two fought on opposite sides. In another instance, a character treks miles through the snow to arrive at a house and listen at a window at precisely the time that two other characters are discussing an important escape plan.

While such moments undercut the novel’s overall effectiveness, fans of historical thrillers will likely enjoy the story for its bold characterizations and intense action. And casual readers of history may also appreciate the story for how it sheds light on a critical period of antiquity unfamiliar to many.