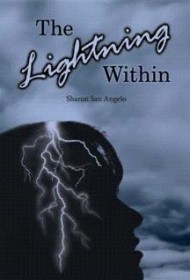 “My pain was a mean, internal apparition without a specific destiny,” writes Sharon San Angelo, the author of The Lightning Within, a memoir of her long journey through the diagnosis and treatment of epilepsy. Throughout the book, her exacting portrayals of the pain she suffers mesmerize and draw readers further into the mystery of what ails her.

At first the book suggests that it might be a story of malpractice, as San Angelo battles with the gut feeling that her problems won’t be solved with a gallbladder removal or seizure medication. Thankfully, she is referred to a specialist in a larger town, and that is where the intensely life-changing aspects of her story–the discovery of a mass in her brain and the decision to have a lobectomy–begin.

San Angelo does an exceptional job of conveying how overwhelming living with a serious illness can be. She keeps her sense of calm resolve throughout the narrative and often turns to religion for comfort. At times, however, these quick statements about God’s work seem rote and hint at a reluctance to delve into her emotions. The inclusion of more emotional episodes–such as when she beat a pillow in frustration or cried over a video about wearing hats and scarves–would help readers better understand her feelings. Additionally, the narrative would be stronger without much of the dialogue, which doesn’t help further the story or reveal more about the characters.

San Angelo’s own medical training as a nurse is an asset in her story. She does an expert job of explaining medical processes from both a medical and lay perspective (so much so that the glossary could be removed). San Angelo’s story is a compelling one that commands attention, especially as the author struggles with the fact that seizures will remain a part of her life. It should appeal to a wide audience, including anyone struggling with a serious illness.