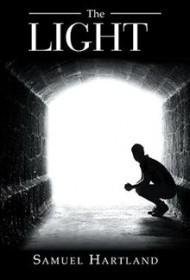 Growing up gay in Scotland in the ‘60s wasn’t easy for Samuel Hartland, and he shares his struggle in this honest but unpolished memoir.

Drawn from journals Hartland began at his psychiatrist’s suggestion, The Light chronicles his struggle with sexual identity from his earliest years into adulthood. While undoubtedly therapeutic for Hartland to write, it suffers, at times, from a lackluster narrative arc.  Hartland writes in the first person, a voice that allows room for introspection and understanding, but he delivers his autobiographical timeline somewhat flatly, just informing readers of each new person he meets, what they do, and what comes next.

Some scenes effectively evoke a Scottish boyhood (sneaking with buddies through a hole in a fence to “pinch some beer” from the local brewery, for instance), while many others are fairly mundane (detailed descriptions of kitchen décor, for example). Though Hartland’s subject is ripe for drama—and he does include some shocking scenes of sex and violence—his detached delivery robs it of the urgency it might have had. When he loses custody of his children, for instance, Hartland outlines the court proceedings, but only briefly addresses the grief he felt before returning to the ongoing account of the sexual experiments and criminal activities that defined his early adult years.

Hartland’s apparent disconnection from his own story is compounded by frequent spelling, grammar, and punctuation errors that only distract the reader further from the unfolding tale.

The Light likely served a cathartic and perhaps healing purpose for its author. Taken as a raw, unfiltered coming-out story, Hartland’s writings may appeal to others coming to terms with their own sexual identities. General readers, however, will find the story too roughly drawn to fully engage.