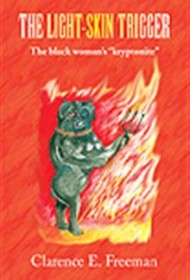 Author Clarence E. Freeman has written a book of very strong opinions about racism, both by Caucasians against African-Americans and within the African-American community. These are subjects that need blunt discussion, but Freeman’s anger clouds his ability to make a clear argument and his narrative too often leaves the reader confused.

The book’s title refers to an incident at Freeman’s church, where an older woman made a rude, inappropriate comment about his wife, who is African-American like Freeman but has lighter skin. He was right to be upset, but spends 20 pages eviscerating the woman in print, mocking her age, clothes, and infirmity, to the point where all sympathy for him evaporates. A sexist attitude and a few crude homophobic jokes make it harder still to care about someone who sees himself as a victim while ignoring the struggles of others.

It’s clear from his writing that Freeman has a sense of humor; many of his stories start out as true, then morph into fantasies wherein he feeds his enemies to “Brutus,” a hellhound all too happy to sink his teeth in and chow down. But his writing is messy and unfocused. An overreliance on quotation marks, irrelevant parentheticals and reader asides make it impossible to read even a few consecutive sentences without losing focus. A story about perceived racism on the job is probably true, but explained so poorly he simply ends up sounding paranoid.

By contrast, Freeman tells a story about traveling with his father as a child and coming upon a car accident. When his father tried to help the injured man and his wife out of their vehicle, the man said, “Get your hands off my wife, nigger,” and Freeman’s father got back into his car and drove away. This one paragraph says more about the corrosive power of racism than the entire rest of the book, which muddles and confuses the issue beyond rescue.