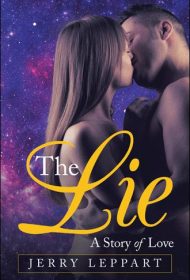 Jerry Leppart’s The Lie is a seemingly traditional fictional story about never-ending love and a long-hidden secret —but with an ultimate reveal involving an other-worldly realm.

“Sometimes a lie is necessary” says an elder Alan as he summons his daughter Chloe to his deathbed to reveal a surprise confession about her identity. This enigmatic opening draws readers into Alan’s first-person narrative recounting his 25-year marriage to his beloved second wife Jenny. As the story evolves, it reveals key moments from Alan and Jenny’s relationship as they meet, marry and start a new family. The focal point throughout remains that “she is…simply the best person” Alan has ever known.

Advancing at a relatively steady pace, with short chapters and dated headings providing a consecutive timeline, the narrative covers much thematic ground, showcasing character compatibility, family interactions, child rearing, and religious ponderings. It also delivers light-hearted humor against the ‘80s and ‘90s backdrop. (The idea of water being sold as bottled refreshment elicits the question, “Can You believe it?”). Some repetition, however, distracts, including duplicated references to a particular lavender turtleneck, Alan’s mother being destined for adventure, and car troubles in Missouri.

As expected, there are triumphs and tragedies: a daughter’s marriage, worrisome pregnancies, the experience of “firsts” with a newborn son, and more. With the passing of elder family members and friends, Leppart incorporates Alan’s reflections and struggles with immortality. Then, an unexpected event suddenly changes the story’s course.

Athough Leppart brings the narrative full-circle, the mystery disclosure readers have awaited disappoints. The conclusion lacks an authentic connection to the central storyline, as an otherwise believable tale highlighting the milestones of a life filled with love, commitment, family, and friends, wraps up with an odd twist that jars the senses: a turn concerning the advances of modern technology.

Considering the final reveal, it’s hard to pinpoint the story’s target audience. Ultimately, it may appeal more to those drawn to futuristic elements, rather than general readers.