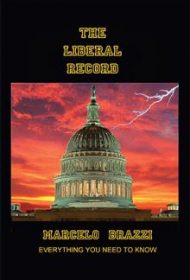 Today, even the most apolitical of citizens can sense the lack of intelligent, reasoned discourse between two increasingly polarized political factions: liberals and conservatives. In The Liberal Record, Marcelo Brazzi provides a well-organized, methodical explanation and analysis of what he believes led to our current, fractured political world.

Brazzi openly positions himself as a social liberal, so readers will know not to expect an entirely objective perspective. Brazzi’s opening volley includes two statements certain to inflame right-leaning readers: “Conservatives resist changes and anything or anyone new or different” and “Virtually everything we take for granted today in our government and culture is the result of liberal progress over the years.”

In his narrative, the author considers how the two sides differ and how our current political arena has evolved to foster uncompromising competition over the sort of rational debate that leads to intelligent legislation. Early on, the author discusses the “Fox News Effect” and dubious media credibility, since Fox unapologetically favors Republican politics over journalistic objectivity. He explains that this is part of the “Dunning-Kruger Effect,” a psychological phenomenon of illusory superiority that pervades current partisan politics.

Brazzi balances his commentary with plentiful supportive studies and ample charts, tables and graphs, usually with the intent to show how liberals fall on the side of progress.

The book stands as a clear indictment of social conservatives, blaming conservative thought and political practices for many of our problems, from a noncompetitive healthcare industry that prohibits a free market that would benefit consumers to unnecessarily overcrowded prisons thanks to an entirely futile “War on Drugs.” “Unfortunately, conservatives continue to believe the billion-dollar war on drugs is the only way to reduce the number of drug users,” Brazzi concludes, “even though that has never happened.”

Like many right-leaning books decrying the left, Brazzi’s volume is unlikely to convert non-believers to his way of thinking, despite his supportive evidence. Liberal readers, however, will no doubt appreciate his viewpoint.