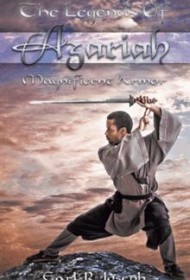 Trinidad native Earl R. Joseph’s first novel begins as what appears to be a spiritual-powered fantasy. Initially, the narrative’s tone is decidedly biblical (for example, “And so it came to be…”), and a major theme early on is following God’s will. But the potentially profound spiritual themes (forgiveness, redemption, finding one’s place in the world through the understanding of religious belief systems, etc.) are only superficially examined.

When three young adventurers from a righteous, pseudo-ecclesiastical kingdom known as Azaria illegally open up a gate into another realm — a morally bankrupt world inhabited by “hooligans, rapists, murderers, [and] outlaws” — they inadvertently set in motion a chain of events that brings both nations to the brink of war and endangers the lives of countless innocents.

Structurally, this storyline is sound, reminiscent of adventure fantasy classics such as Moorcock’s History of the Runestaff quartet and Zelazny’s Amber sequence. The three main characters, although two-dimensional, embark on interesting and action-packed journeys. After being found guilty of being part of the party that opened up the gate, Tamar Kedemah , a recently graduated soldier, is exiled to a remote island populated by nightmarish beasts; and young priest Abida Meteba is essentially imprisoned in the subterranean catacombs beneath the temple. Kader Balhannan, who initially escaped punishment, is swept up in the chaos that ensues later on and is forced to leave Azaria.

But despite its early promise, the narrative falls well short of its potential. Glaring grammatical errors and inconsistencies abound. The nation of “Meckhema,” for example, is spelled “Meckhema,” “Mechkema,” and “Mekhema” at varying times. The nation is called “Azaria” and its inhabitants “Azarians,” so what does the term “Azariah” in the title refer to? Poorly developed characters and writing that doesn’t flow smoothly, is burdened by the improper use of words and other challenges doom this novel to mediocrity, which is a travesty because the potential existed for a wildly entertaining and spiritually powerful adventure fantasy.