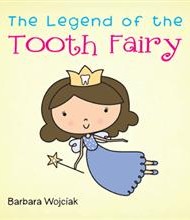 Questioned by their children, many parents have struggled to come up with an origin story for the tooth fairy.  Barbara Wojciak offers her answer in The Legend of the Tooth Fairy, a sweet picture book that recounts how the tooth fairy got started.

Wojciak’s fairy notices a sad, lonely moon in an otherwise empty sky and decides to help by finding something shiny and bright to keep the moon company. Sighting a shiny tooth under a young girl’s pillow, the fairy slips a coin under the pillow and puts the tooth into her sack. When the fairy goes to show the moon what she’s found, she discovers that the tooth has become a star, which will now help fill the sky and make the moon happy.

The Legend of the Tooth Fairy is a sweet tale, but there is a logical problem that is glossed over. Initially, the tooth fairy considers giving the moon shiny mirrors, rings, or coins, but notes:  “I can’t just take something away from someone and give it to the moon to make her happy.” When the fairy sees a girl slip a tooth under her pillow to keep it safe, though, that thought is modified to: “I can’t just take the tooth, but I could exchange it for something else that’s shiny.”  The fairy exchanges the tooth for a “bright, shiny silver dollar” that had fallen out of someone’s pocket. If it’s acceptable to take the shiny found coin, why not bring that to the moon in the first place?

Admittedly most children won’t give a second thought to this question,  and the story is well told, with clear, understandable language and a lyrical, singsong delivery that doesn’t trip itself up with rhymes.  Wojciak shows restraint, too, by offering simple, charming, and effective black-and-white line drawings. Overall, The Legend of the Tooth Fairy is a cute, enjoyable book for young readers—perfect for a bedtime story.