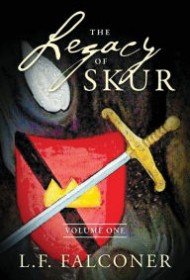 L.F. Falconer boldly embraces complex narrative devices in The Legacy of Skur, the second of what promises to be an epic saga.

The tome reads like three fantasy books in one: Each of three sections boasts its own well-crafted characters, distinct tone and unique perspective. The first part follows Fane, the son of a warrior intent on becoming a wizard. Along with his companion Jink, Fane sets out to scale the ominous mountain Skur in hopes of bringing back gold and other riches guarded by the dragon Ragg, but the mountain ultimately ends up being his prison. The second part focuses on Fane’s warrior brother Kael, as he brings up his brother’s infant daughter, finds love and wages his own battle against the shape-shifting dragon. Fane’s grown daughter Elva is the protagonist of the third part, which is rooted in themes of legacy, revenge and redemption.

Although the book spans several generations and explores the Tillaman Realm, a world full of magic, mystery and complex mythology, Falconer ties everything together through characters and setting. She works to distinguish each story, using different tenses and perspectives, adjusting her narrative style to fit each epic chapter.

Throughout, the author offers a well-honed approach to storytelling, employing descriptive prose and a vast vocabulary. This description includes—as with George R.R. Martin’s A Song of Ice and Fire saga—plenty of graphic details regarding sex and violence. Even typical battle scenes contain far more bloody detail than one finds in J.R.R. Tolkien or Terry Brooks novels; after a battle with a monstrous boar, for instance, one character gleefully dines on the beast’s entrails and manipulates its corpse. This, and the shifts from first-person to third-person perspective, may make the book a bit too challenging for casual or young fantasy readers.

However, for adult fans of the genre who appreciate experiments with narrative conventions and aren’t repelled by graphic elements, Falconer offers an intriguing and well-crafted fantasy of epic proportions.