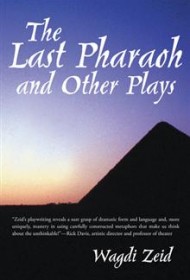 In this collection, Wagdi Zeid, Ph.D in theatre from City University of New York and teacher of Shakespeare and drama at UMass Lowell, pens three plays, each different in style and intent.

“The Last Pharaoh,” a play in two acts, recounts the actions of the Priests of Amon to unseat the crown prince, Akhnaton, in 1300 BC. Akhnaton has been—in name only—co-ruling Egypt with his father for the last 13 years. Now that his father is dead, Akhnaton intends to make Egypt a nation that worships the one and only true god rather than the multiple gods supported by the Priests of Amon, under whose rule “the priests’ pockets grow fat every day while the people suffer.”

Akhnaton declares he will “be the last pharaoh, will eat, drink and dress” like all Egyptians, and, on being crowned, dictate that, “official temple worship shall cease.” Standing firmly with Akhnaton is his wife Nefertiti.

Throughout most of the first act, story/history is presented through characters telling of events one to another, which results in a non-dramatic effect. Late in Act 1, the play begins to work dramatically and continues so to the end.

“Winter Dreams,” a short work within the realm of Theatre of the Absurd, is perhaps the most dramatically successful of the three. With nods to Samuel Beckett and Harold Pinter, Zeid’s examinations of the status quo and the anomalies within the institutions of religion, education, and family, are funny, hopeless, cynical, painful, and insightful.

“The New Odyssey” features four characters from our literary past. In the wake of World War Three, Professor Odysseus summons Hesiod, Homer and Shakespeare for a discussion. After positing the idea that man’s desire for woman also produces man’s desire for power, conflict, and ultimately death, Odysseus puts forth two possibilities: go on suffering or get rid of the women.

Leaving readers on that note, this worthwhile collection should be fodder for much thought and debate.