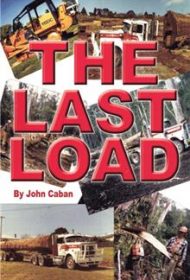 Sometimes in life, a single event changes everything in a flash. For author John Caban, one such pivotal moment would have been more than enough, but life had more hardships in store for him. The Last Load revolves around two major accidents and his slow and dogged recovery.

Caban writes about his early life in Australia and his desire to leave school and the family farm trade to set out on his own path. He becomes a logger, and one day while working alone, his chainsaw kicks back at him and nearly severs his leg. Caban manages to drive himself to a house some distance away and get help, but he eventually loses the leg. After learning to use a prosthetic limb and getting back to work, he suffers a far worse injury one day when a log falls off a truck and crushes one side of his body, leaving him with a head wound, organ damage and several broken bones.

While the writing here is, for the most part, free of spelling and grammatical errors, short passages are sometimes repeated, which is distracting. Additionally, while nobody expects Caban to be upbeat given the seriousness of his injuries, he’s often offensive, complaining that “ethnic” doctors failed to adjust his prosthesis correctly and sniping that one nurse was “very nice but not quite model material.”  Virtually every scenario is set up as him versus the system; for example, he describes loading his trucks past the legal limit (“Rules are only there to tempt the daring”)—but when things go wrong he’s quick to engage in self-pity.

There are pictures throughout, mostly of logging equipment, and the book may be a welcome keepsake for friends and family. Unfortunately, most of Caban’s doctors, women, people of color, or those kindly disposed to their fellow humans may find the bitterness here offputting.