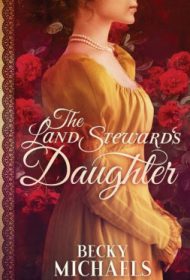 In The Land Steward’s Daughter, Becky Michaels delivers an immersive Regency romance between Lord William, the second son of an Earl, and Elaina, a woman of lower social status who has been Will’s close friend since childhood.

For eight years, Will has been fighting in the Napoleonic Wars, but the two have corresponded regularly, and when Will returns home, passion blossoms between them. The disparity in their status, however, means that Will’s family will not support them. Instead, Will is expected to marry an heiress to help him restore Larkspur Castle, a rundown estate in Wales.

Elaina, meanwhile, is being encouraged to marry a wealthy banker who offers her a comfortable future but doesn’t share her interests in life in the countryside. If Elaina and Will decide to throw convention to the wind, they will face challenges at Larkspur, family disapproval, and their own insecurities about whether they have done the right thing.

Michaels presents an enjoyable romance with strong descriptions and period detail. Themes of marriageability, money and social class run throughout, providing a layer of complexity beyond the common standards of the genre, with a secondary storyline concerning Will’s brother and an heiress he has been destined to marry since he was ten years old. Elaina stands out as a strong and unconventional character who draws the reader’s sympathy. Although Will is less well-developed – lacking the maturity one would have expected from his years at war — their story is compelling. The novel includes several erotic scenes that are explicit but sensitively written.

The pace dips at times with repetitive passages recounting the main characters’ internalized insecurities about their relationship. Some modern word choices, including the use of contractions “could’ve” and “would’ve,” and occasional word-choice errors (e.g., “full reign” for “full rein”) detract from an otherwise successful romantic novel.

Overall, this is an engaging Regency tale with a strong message about love, marriage and family obligation.