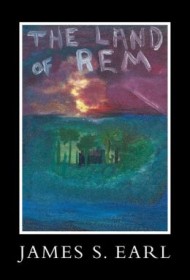 This interesting collection includes the title novella, along with 10 pieces of flash fiction, all of which explore the subjects of dreams, time travel, death, and spirituality. Recurrent themes (time is relative), images (life/death represented in dreamscapes), and the time-traveling character Professor Emit N. Relevart (who also appears as “Relevant”) drift in and out of these stories.

The novella concerns Tim Stubbs, an uncaring insurance executive who meets one of his dying customers in a dream. When he learns this customer is comatose from brain cancer, Tim returns to the dream for more information. An experienced lucid dreamer, he manipulates the dream to meet important dead people from the past in The Land of REM.

The stories that follow include “Recall,” in which a man attempts to bring his comatose wife back to life; “Death Takes a Holiday,” where a prison guard describes his death experience; and “Felicia Nightingale,” which focuses on a squad leader in Vietnam who regularly visits his dead wife. “Angel,” an award-winning story according to a notation, tells of an inspirational encounter between two truckers meeting accidentally on a busy Texas highway. In addition, two stories written as personal essays offer a humorous look at colonoscopies and childhood mythology.

While the recurrent themes are intriguing enough to warrant exploration, without further depth or breadth in subsequent stories, recurrence becomes mere repetition. For instance, in the novella, Tim Stubbs awakens from a dream in which he eats an apple and finds “As he brushed his teeth a piece of apple skin came out in his spit” and later, in “Felicia Nightingale” a corporal endures a near-death experience during which he dreams of eating crawfish and awakens with a piece of crawfish shell stuck in his teeth. Numerous grammatical and spelling errors also distract from the storytelling.

Even so, this collection is entertaining overall and may appeal to short story and science fiction fans with interest in the aforementioned themes.