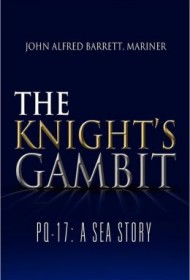 Among the forgotten tragedies of World War II, the destruction of Convoy PQ-17 in the Arctic Ocean is surely one of the most poignant. Following an initial assault by German torpedo planes and U-boats on July 4, 1942 and a seeming threat from Hitler’s battleships, the British Admiralty ordered the doomed convoy’s destroyer escorts to withdraw and PQ-17 to disperse, unprotected. In the next five days, German aircraft and submarines sank 22 of the Allied merchant ships. Just 13 vessels escaped to northern Soviet ports.

Retired Texas engineer John Alfred Barrett, who as a 21-year-old merchant mariner had sailed in an earlier convoy to Russia, endeavors to make high drama of the PQ-17 disaster. But his ultra-slim volume–war fiction on a crash diet–never chooses a tack. In 49 pages of text, some of them half full, the author collects disorganized elements–six pages about a conscience-stricken British First Sea Lord eating lunch with his wife, three more about an Irish-American sailor in the heat of a ship’s engine room, the brief reverie of a young German U-boat captain who imagines “I could hear the sirens singing to Ulysses,” and a bewildering incident involving a pair of Soviet police inspectors (one of them a woman) who encounter some of the convoy’s stranded seamen in the port of Archangel. There is no actual battle scene.

What Barrett has produced, then, is an unrefined notebook–containing snippets of character, bits of naval history borrowed (with attribution) from S. E. Morrison’s The Battle of the Atlantic, and his own memories of warfare and the sea–that he might have developed into a short story or novel. His heart is in the right place, but these preliminary sketches are just that.