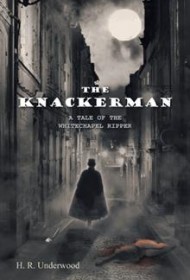 It’s no wonder that Jack the Ripper has inspired dozens upon dozens of fictionalizations throughout the years. The mystery that shrouds the serial killer’s grisly murders virtually invites novelists and playwrights to fill in the blanks.

It’s within this cultural and literary tradition that H.R. Underwood’s The Knackerman imagines John Stuart Meyerson as the infamous Whitechapel murderer. Loosely based on the Ripper suspect James Maybrick, Meyerson is a successful cotton merchant residing with his wife and two daughters in late 19th century Liverpool. Like an ordinary wealthy Englishman of the time, his life is full of cricket, excursions to Leeds and London via train, fine wine, extramarital affairs, and tea.

But myriad skeletons line Meyerson’s closet. For one, he’s hopelessly addicted to cocaine. For another, his mental health is deteriorating from the syphilis he contracted from a prostitute nearly two decades prior. Somewhere in the depths of this mental corrosion, Meyerson begins hearing voices inviting him to be “God’s Avenger” on wicked women.

Although Underwood’s novelization begins with what seems like a dreary and tediously over-researched chronicle of upper class life in 19th century England, a lot of the presumably mundane details — like the fact that Meyerson was an unsuccessful medical student — establish the mental capacity, personal motives, and even dietary habits that make a man insane enough to commit beastly murders. And thanks to a more luridly rousing second half of the book, The Knackerman ultimately succeeds in its ambition to give Anglophiles and Jack the Ripper enthusiasts another perspective into the mystery and cultural intrigue surrounding both the history and the legend of the 1888 Whitechapel murders.