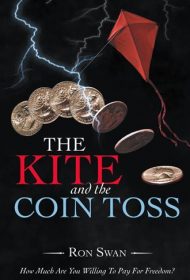 This complex, intricately plotted novel opens with speculation: What if the British had won the American Revolution?

In this story, first comes “The Signers’ Day of Reckoning” in 1781, during which those who signed the treasonous document five years earlier are hung in Philadelphia, then drawn and quartered, all before the approving eyes of George III, who has crossed the ocean to bear witness. Although not everything goes as planned (due to the alternate designs of the traitor George Washington), the king changes the city’s name to “George’s Cross,” honoring the patron saint of England, and makes it the seat of his empire.

The novel now moves to the 21st century, adding a dose of science fiction to its alternative history. The British Empire has become an all-seeing tyranny ruled by the despotic tyrant, King George VII. To fatten the royal purse, he encourages a program searching for ways to capture and store electricity from lightning, bringing him into conflict with Joshua Franks, who works on the project while tormented by doubts about the world in which he lives.

Collaborating with a small, like-minded group and aided by his surprising discovery of observations on electricity by Benjamin Franklin, to whom he is unexpectedly connected, Joshua is eventually able to transport himself backwards through time. Can he change history?

This is a promising conceit, and the story, indeed, offers much intrigue. At times, though, the novel feels overstuffed with disparate elements. This makes its fictional take on history hard to follow, particularly when it comes to imaginary scientific breakthroughs (e.g. “Lightning is merely the resulting friction of two moments of time scraping each other…”). The author’s attempt to blend the various strands also can feel strained, challenging readers’ ability to immerse themselves in the story.

Still, Joshua’s evolution from mischievous student to committed revolutionary is authentically told, and those interested in science, history, and fantasy might find enough compelling elements to make the story worth a look.