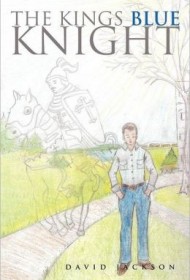 Author David Jackson’s goal in writing The Kings Blue Knight is to “inspire people in their walk with God.” He constructs a work with two parallel story lines: one of a knight and a stable boy, and one of a modern-day struggling young adult.

The story line of the knight and stable boy takes place during an era of kings, knights, horses, and dragons. Each chapter opens with a few paragraphs about these ancient characters, serving to foreshadow the latest dilemma in the modern-day character’s life. On its own, however, this story line has no continuity or logic.

The modern-day character, Eric, falls in and out of his faith, battling demons of alcohol, drugs, fornication, unfaithfulness, stealing, and laziness. Somehow he finds a girlfriend, Monica, who is ignorant of or willing to overlook all these faults because Eric is handsome and compliments her on her cooking. The story proceeds even more toward the absurd when Eric, with no provocation and a faithful Monica sitting at home, begins soliciting strange girls at the bar.

Eric’s downward spiral is complete when Monica finally becomes aware of his shenanigans and dumps him. He then threatens to jump from a five-story building. At this point, the author asks us to evaluate our own lives so we don’t end up like Eric.

Although the author’s sincerity is evident, this book is in need of polishing to correct not only rampant grammar errors (spelling, grammar, punctuation, tenses) but also illogical and inconsistent plot issues. For example, besides the illogical nature of Eric and Monica’s relationship and the lack of continuity in the knight story line, we never know why the knight and Eric are both called “blue knights”; the connection between the two seems forced. Readers will likely find such unexplained details frustrating, and with the story so difficult to follow, they aren’t likely to find a satisfying read in these pages.