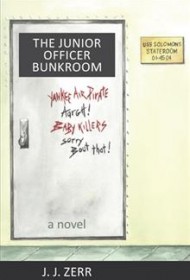 Author J.J. Zerr takes his series about naval aviators into the dangerous skies over North Vietnam in his third book about young Navy pilot Jon Zachery.

Set in 1970, the book accurately depicts the treacherous job of flying bombing sorties during the Vietnam War but also the disheartening ethics of modern warfare as well as the social upheaval of the era. Zachery’s path to becoming a member of the attack squadron stationed on the U.S.S. Solomons has been well-documented in Zerr’s earlier books The Ensign Locker and Sundown Town Duty Station, although new readers can easily catch up.

The first third of the novel depicts the pilot’s relationship with his wife and kids, his struggles with drinking, and his desperate desire to fly combat missions. Zachery’s counterpart is Amos Kane, a hot dog pilot with the nickname “Cool Hand Duke.” But Kane undergoes a dramatic reversal when he starts dating Charlotte Wilkins, a young war protestor who is accidentally killed in a confrontation outside a naval air station. Adopting Charlotte’s feelings about the war, Amos joins a loose association of ensigns who openly protest the war.

Zerr is thoughtful in depicting the slippery slope that presents itself to men at war. Zachery begins to experience a kind of bloodlust in battle, firing on positions in North Vietnam while clearly breaking the rules of engagement. Meanwhile, Kane manifests his protest against the war further by engaging in disruptive activities that endanger his fellow pilots. The conflict between the patriotic Zachery and the traumatized Kane comes to a head during a disastrous mission at the end of their deployment, and neither man remains unscathed in the end.

Zerr’s novel is a dramatic mix of authentic aerial combat sequences combined with a taut story about the costs of war. Readers who enjoy the novels of Stephen Coonts and Dale Brown or even the tense drama in Aaron Sorkin’s A Few Good Men will find similarly exhilarating pleasures here.