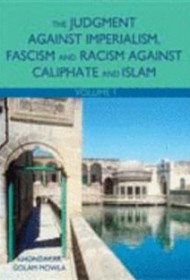 Khondakar Golam Mowla was born in West Bengal in 1946. Although he currently lives in the United States, his passion remains the Middle East and Orient. His book’s back cover makes that clear: “This book is all about Caliphate and Islam which was destroyed in 1914 through first illegal invasion of Iraq and Caliphate was abolished on 29th October, 1923 by Ataturk, a secret Jew according to Joachim Prinz…”

Along with elucidating Mowla’s devotion to restoring the caliphate, the spiritual and political head of Islam, this quotation also exemplifies two of the book’s key weaknesses: grammatical awkwardness and a tendency to indulge in conspiratorial theories of history.

The book is massive– all the more daunting given that it is printed on 8”x11” pages and only the first of two volumes. It reproduces over 125 documents, ranging from Wikipedia entries, to book excerpts to transcripts of speeches and so on.

Much of the information included is questionable. Consider: “Exhibit on War Mongering against Iran which never invaded any country or Continent during last thousands year [sic].” In fact, under the Safavid dynasty (1502–1736), for more than 100 years, Iran (Persia) engaged in almost constant warfare (both offensive and defensive) with the neighboring Ottoman (Turkish) Empire.

Similar questions can be brought to bear on other articles. For example, an “exhibit” that informs readers about “Spanish, Anglo Saxons [sic] thieves whose ancestors have stolen 4 continents,” then asks: “how many Continents Arabs or Muslims have stolen…? [sic]” Apparently, Arab conquests don’t count as stealing but European ones do. Similarly, the book implies that the Muslim conquest of Spain brought light, while the Christian re-conquest brought “death and destruction” (“Exhibit when Europe was dark and Muslim Spain gave the Light”).

The cast of characters in this book is as wide-ranging as the source material, mentioning everyone from the founder of Islam to Walt Disney, T.E. Lawrence (of Arabia), Gertrude Bell, U.S. presidents and countless others in between.

Judgment Against Imperialism is an unabashed attempt to show that Jews and the West are involved in an effort to suppress Islam and its rightful head, the caliphate. Discerning readers may disagree with Mowla’s selection, as well as with the accuracy of much of its content.