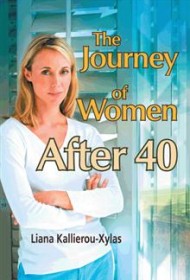 First published in Greece in 2004, this thoroughly researched book draws on the work of numerous, largely American, authorities on women’s issues, from Natalie Angier to Carol Gilligan to Christiane Northrop. The result is a comprehensive report on what women can expect to experience, physically, psychologically, sexually, socially, and cognitively throughout middle age and into late life.

The book includes chapters on each decade, from 40 to 80 and beyond, assessing what challenges and rewards each of these life stages can hold. It touches on work, retirement, late-life marriage, preserving physical beauty and a healthy brain, among other topics. The author includes brief testimonials throughout the book from an international cast of women of varied ages and socio-economic backgrounds. Perhaps because the author is European, there isn’t the relentless upbeat tone that so often characterizes American self-help books. A 75-year-old Greek woman admits, “I often sink into despair” because of her health and financial problems.

An impressive advertisement for her argument that a satisfying life involves constant renewal, author LIana Kallierou-Xylas earned a master’s degree in psychology in her late forties and now in her late sixties is a practicing psychotherapist. She also displays an impressive talent for clear and engaging writitng.

Nonetheless, there are a few problems with focus and organization. The opening chapters are too general (“The Development of Man” and “The Stages of Human Life”) and her one-page epilogue reads more like a prologue. Some judicious pruning would have eliminated extraneous chapters, as with “is There a Male Climacteric?” and “The Immortality of the Soul,” On another note, Gloria Steinem, contrary to her portrayal here as “the late Gloria Steinem” is still very much an exemplar of a life well lived at age 78.

Despite such issues, the author, for the most part, has synthesized her material effectively for a growing audience hungry for information on successful aging. Baby boomer women and others will find invaluable advice in these pages.