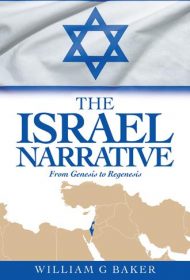 William G. Baker is a senior lecturer in Arabic and Middle Eastern studies at Baylor University. This title is an outgrowth of his course “Readings in Middle East Studies,” for which he was unable to find an assignable single text for his students that covered Israel’s entire history, from Abrahamic day through the present.

Baker is the son of Christian missionaries raised in the then-new state of Israel. He’s proficient in Hebrew and Arabic as well as English and is a retired military intelligence officer. The Israel Narrative is thorough in breadth if not in depth. It begins with the ethnogenesis of Hebrews in antiquity through the Diaspora, the formation of the State of Israel, and into the present day. The main historical events are covered, including WWI, the Balfour declaration and its reception in the Arab world, the Six-Day War and Yom Kippur War, and attempts at peace.

Basic information about Israel’s infrastructure is also included, such as descriptions of modern Israeli society and culture, social concerns, and the government and military. The author ends with potential solutions for “the ‘eight-hundred pound gorilla in the room,’ known as the ‘Palestinian question,’” including the one-state solution, two-state solution, and others.

Baker’s approach to a complicated subject, one that is emotionally weighted for many, is admirably even-handed; the “Mistakes and Missed Opportunities” chapter apportions blame to all involved parties, including Great Britain and the U.S.

While the book hits all the high points, its highly academic structure and tone clearly reflect its intended use as a survey course for Baker’s students, and there’s no room to go into depth or detail. Readers may be startled, for example, to find the Holocaust (the impetus for the State of Israel’s creation) addressed in a single paragraph.

Because of its highly specific intended use and resultant structure, The Israel Narrative may struggle to find a general audience. However, it’s an inarguably helpful guide for Baker’s students.