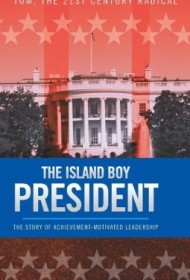 The world of presidential power and the ways it’s filtered for posterity by biographers seem like evergreen topics for a novelist to explore. Those ideas are part of The Island Boy President, but the story is too often obscured by problems with the writing that leave the reader confused about the author’s intent.

Island Boy tells the story of Paul Harvey Collins, named for the famous radio announcer, who went from humble origins on Sullivan’s Island, South Carolina, all the way to the Oval Office with his best friend by his side. Collins tells his story to Dylan Johnson, “a very well-known and respected presidential biographer,” and they meet several times to review his rise to power and discomfort with the trappings of public office. A postscript mentions the recent government shutdown and opines that President Collins’ vision would have prevented such an outcome.

The author, identified only as “Tom, the 21st Century Radical,” might intend this story to be a fable about the beneftis of limited government, but it’s impossible to say for certain. He switches from third to first person narration without warning, confuses words to occasional humorous effect (“secession” vs. “session”; “precious” vs. “precocious” and “basil” vs. “basal” cell cancer), and writes dialogue that sounds forced and leaden. For example, President Collins describes his efforts to foster peace in the Middle East thusly: “I finished my speech by pointing out how the governments in the United States had merged governments to reduce the cost of government. I showed charts of mergers and the reduction in the budgets. I said the Islamic world needed to consider mergers.”

Island Boy might contain just the shot of adrenaline our government needs. However, until the writing is made clear and understandable, the ideas in this novel remain largely hidden from view.