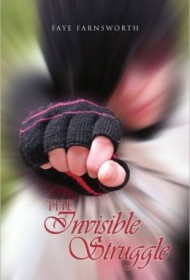 In The Invisible Struggle, Faye Farnsworth uses fantasy tropes to tell a story of the battle between good and evil in the lives of contemporary teens. At the same time, she tries to reconcile God’s seeming indifference to the horrors that take place in the lives of innocent people.

High school sophomores, Larry and Dave, are riding their bikes in the woods when they stumble on a pair of glowing green glasses. Looking through the lenses, they see and talk to their guardian angels. The glasses also allow them to peer into the past and the future. Through discussions with their guardians, the boys learn about the Trinity, the Bible, and the constant battle between the good and the fallen angels to capture earthly souls. (These teenagers and their friends are amazingly naïve; apparently, they have never heard of God, angels, Jesus or the Bible, even though one of them has a Bible on the coffee table at home).

What the teens hear are common Bible stories, but the author has changed the names of the characters and places, using mythological terms and hyphenated names. The Holy Spirit is “Zephyr”; Lucifer is “Hesperus”; “R-dor” is heaven; one angel is “J-gette”; another is “D-go”; and so on. While hyphens and apostrophes are frequently used in fantasy fiction to show that the characters and places represent unknown lands and characters, they are unnecessary here, where the names merely substitute for well-known Biblical terms.

The most exciting chapter, near the end, centers on a high school shooting. It seems strange, though, that the boys never used the future function on the glasses so that they could have been warned.

Fantasy fiction often symbolically presents religious propaganda. C.S. Lewis did it to perfection in the Narnia books. The Invisible Struggle lacks that author’s subtlety. Readers interested in the battles of angels on earth would be much better served to read Lewis’s The Screwtape Letters.