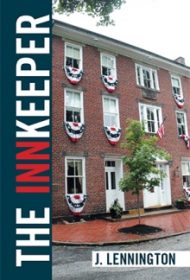 Dead slaves and others appear as shimmery spirits to bedevil an Ohio hotelier in the latest novel by author J. Lennington, titled The Innkeeper.

After being laid off from a long-time job, protagonist Craig Newell has just become manager of the nearly 200-year-old Spread Eagle Tavern Restaurant and Inn. On his first night, a chill breeze brushes the back of his neck. It’s not a draft. It’s the ghost of a legendary guest who hanged herself more than a century and a half before.

The author builds the suspense very slowly as he intercuts scenes of the haunted inn’s supernatural residents with bickering among Newell’s own family members, who are upset because his new lower-paying job has necessitated a rural relocation.

Newell becomes a true believer when a dead slave appears to him one night, setting off a string of visions that extend beyond the inn and into his troubled sleep at home. What are the apparitions trying to communicate? Readers encounter many repetitive plot recaps before finding out.

In addition to the unnecessary plot recaps, numerous typos mar the text (“He turned on his heal [sic]” and “Craig slammed on his breaks [sic]”). Also, the story slows significantly at times, most notably at more than a dozen acrimonious breakfast scenes. On the plus side, however, some of the most authentic lines are delivered by 13-year-old Leah, whose popularity at school plummeted when the family was forced to move. Anyone who has ever seen a teenager roll her eyes will relate roundly to her character.

The book could benefit from a thorough proofreading and the services of an editor dedicated to streamlining the story. Still, The Innkeeper shows promise, shining most brightly in the action scenes devoted to reliving the poltergeists’ past.