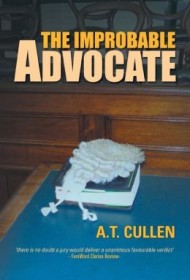 Today’s courtroom thrillers are dominated by two lawyers – John Grisham and Scott Turow. They’ve defined the genre so well that writers without law degrees won’t even try to compete.

So Australian barrister A.T. Cullen at least has the background to play the game with The Improbable Advocate. Readers can assume Cullen has nailed the Aussie legal system. Problem is, he writes with the cant and rhythm of a lawyer, a potentially fatal flaw in the page-turning world.

In The Improbable Advocate, journeyman lawyer Matthew Jameson works in an uppercrust Sydney firm uncomfortable with his wretched criminal clientele. When a prominent politician is entangled in a young woman’s murder, the firm assigns Jameson to the seemingly hopeless case. With the help of a forlorn colleague and sex with a prosecutor, Jameson embarks on proving his calculating client innocent.

Australia’s preference for single quotation marks, British spelling deviations, unfamiliar slang terms, and a “willy-willy” — that’s a Down Under dust storm, — of Aussie legal terms will be speed bumps for American readers. Then there’s the complicated geography. One example: The murder happens in autumn of 1966 … and the trial begins in spring of 1966. Makes perfect sense to an Aussie, but it would stymie U.S. readers who never pondered how seasons are reversed in the Southern Hemisphere.

But far more significantly, The Improbable Advocate never lives up to the page-turning thrills promised. The action unfolds at a deliberate pace, the hero’s jeopardy is less than adrenalizing, none of the two-dimensional characters is especially sympathetic, and too much legal codswallop drags down the story. (“The jury will be in no doubt that Emerson has altered the record, and his evidence about the conversation in the police car is now discredited,” Jameson says at a pivotal cliffhanger.)

Turow and Grisham know that the courtroom is just one set in a bigger world where life is more perilous, less just, and messier. The Improbable Advocate might have benefited from venturing out from the courthouse a little more.