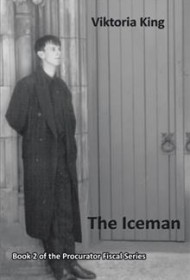 In The Iceman, Viktoria King employs conventions of the traditional police procedural to detail the investigation of grisly serial rapes and murders in various locales in Scotland.

Readers are immediately thrust into a scene of consensual sex between Detective Grace Scott and her lover, Detective Marcus Campbell, with specific detail about genitals and bodily interaction spelled out. The narrative then moves to the world of professional detectives where we learn that an investigator called Lieb is still reeling from the rape and murder of his beloved. He and his colleagues, including Grace, Marcus and Grace’s new detective partner Adam McAddam, track a “sexual-assault-and-torture pack” as the group commits additional lethal attacks.

The second in a series, this story would benefit from some backstory and more than a passing reference to the fact that the “Procurator Fiscal” of the title is one who solves heinous crimes. It’s unclear if only Lieb plays this role in the detective department and what the title really means.

Character development is also problematic. It’s not just step-by-step action that deepens a police procedural but the way characters carry it out. King often distracts readers by relentlessly recounting mundane activity, such as a character putting on the kettle or performing her “toileting” duties. She also uses full names for insignificant characters, overwhelming readers in a sea of detail that does nothing to advance plot or character.

More disturbingly, King indulges this unrestrained keenness for gratuitous detail in her graphic depictions of sex for pleasure, a body blistering in an arson blaze, and the gruesomely described sadistic rape and murder of multiple victims.

While this book seems aimed at readers of hard crime novels like The Girl with the Dragon Tattoo, it misses its mark. Even fans of edgy, sexually graphic crime novels are likely to feel let down by the irresolution—and lack of a clear statement that another episode is planned—at the book’s close.