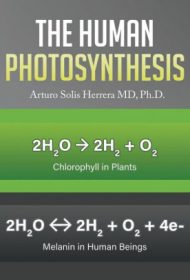 Potential groundbreaking scientific discovery is almost always met with skepticism. For every Nobel Prize winner such as Barry Marshall, whose discovery that ulcers are caused by bacteria and not stress was initially rejected, there are many scholars whose work may never be recognized.

Time will tell if the notion of “human photosynthesis” fall into the former or latter category. Meanwhile, Arturo Solis Herrera asserts that he has broken new ground, and proposes here that the equivalency of photosynthesis in humans rests on the universally available pigment melanin. Herrera’s main thesis is that in humans and plants alike, producing energy from water is the basic process for life to express itself. While plants rely on the pigment chlorophyll for this process, Herrera says that humans rely on melanin.

Herrera’s conjecture expands to include his position that the commonly held big bang theory has fallen by the wayside, and that dark matter present at the beginning of time was, in fact, melanin. He rounds out his presentation with assertions that humans’ need for energy from food pales beside our need for energy we receive from the triad of light, melanin, and water.

Herrera paints in broad strokes, and while he includes an impressive list of references and suggested reading at book’s end, he doesn’t offer conclusive evidence from any tests from which he draws his conclusions. Readers may also be puzzled by notions such as the similarity of the human eye iris to a peach seed. A more robust discussion of his experimentation is needed to support this game-changing theory.

This dense read is further complicated by grammatical errors, such as: “In our experience, is that supplemental oxygen, despite the scarce transport to the interior of the body; It is so toxic, because it begins to consume valuable hydrogen, forming water.”

Those who enjoy fringe theories may find this provocative. Readers who require a more coherent, well-supported, probing discussion of new theories, however, should look elsewhere.