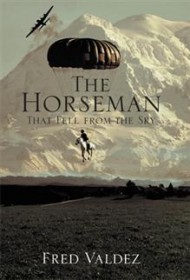 The main character is Francisco “Cisco” Cordova. Cisco, a Mexican-American Tejano, grows up on a large Texas ranch. His family is employed by the ranch but is also welcomed by owner Judge Trully at the dinner table each night. Cisco learns to be a strong Christian, a horse whisperer and expert horse handler, as well as caretaker of the judge’s daughter Rose. When a romance develops between Cisco and Rose, it must be put on hold while Rose attends college and Cisco joins the war effort.

Because of Cisco’s magnetic personality and great looks, he routinely attracts the attention of young females. Eventually, he becomes an airman and is transferred overseas. When Cisco’s plane is hit, he parachutes to the French countryside, a victim now of severe amnesia. Since he has no recollection of his previous life, he wholeheartedly joins the French Resistance, and new beautiful women enter his life.

The romance elements work well in this story. Amnesia gives a moral character a good excuse to pursue various relationships, while readers are left to wonder what will eventually happen with Cisco and Rose. Cisco is a valiant hero who strives to do what is moral, so it’s understandable when women love him. War details are masterfully woven into the tale as well, giving it the rich feel of the best historical fiction.

Unfortunately, editing mistakes are rampant and obvious, from words left uncapitalized to incorrect word usage (“ever”/”every”; “hay”/ “hey”), to sentence fragments and tense issues. All of this detracts from the enjoyment of the story.

With a professional edit, this novel — clearly the work of a talented writer — would please a wide audience, including Christians, romance readers, and war enthusiasts.