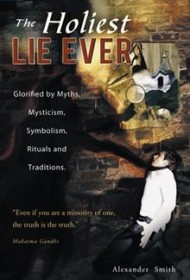 In The Holiest Lie Ever, Alexander Smith sets out to awaken those who have eaten the lotus of religion and shake them from their myth-embracing slumber.

Raised in a strict Christian household in South Africa, Smith eventually began looking beyond a gospel-oriented worldview and noticed striking similarities between his beliefs and the tenets of such faiths as Buddhism and Hinduism. Upon further investigation, he began to see that many of the world’s most cherished religious beliefs were little more than dangerous misdirection masquerading as truth. “[O]f all the social institutions we are born into, directed by, and conditioned upon, the religious system exists as one of the most unquestioned forms of faith there is,” he writes. And from this, “Mankind has nurtured the misery, conflict, destructive brutality, and aggression…it has formed a society based upon those lines.”

Smith’s book opens with a brief examination of the history of religion before shining a critical light on the Old Testament, the devil, heaven and hell, the Gospel writers and Jesus, to name a few. His M.O. is to show how Egyptian and Buddhist beliefs run parallel with Christianity, insinuating disingenuous intent on the part of Christianity’s early proponents. Smith does not approach his material as an atheist or even as an agnostic, but as a man disappointed with how God has been manipulated to meet a human expectation.

One sympathizes with his point of view. His arguments are impassioned and urgent. Yet, a work like this, which cites so many different religious beliefs and draws so many comparisons, needs annotations and footnotes. This book has neither. Moreover, Smith’s fiery arguments are cooled by many grammatical mistakes, awkward sentence structures, rough transitions and historical inaccuracies (example: though virgin birth similarities exists in Christianity and Buddhism, the Buddha does not share the same birthday as Jesus).

Overall, Smith’s intentions are admirable, but the book needs work to become the eye opener he hoped it would be.